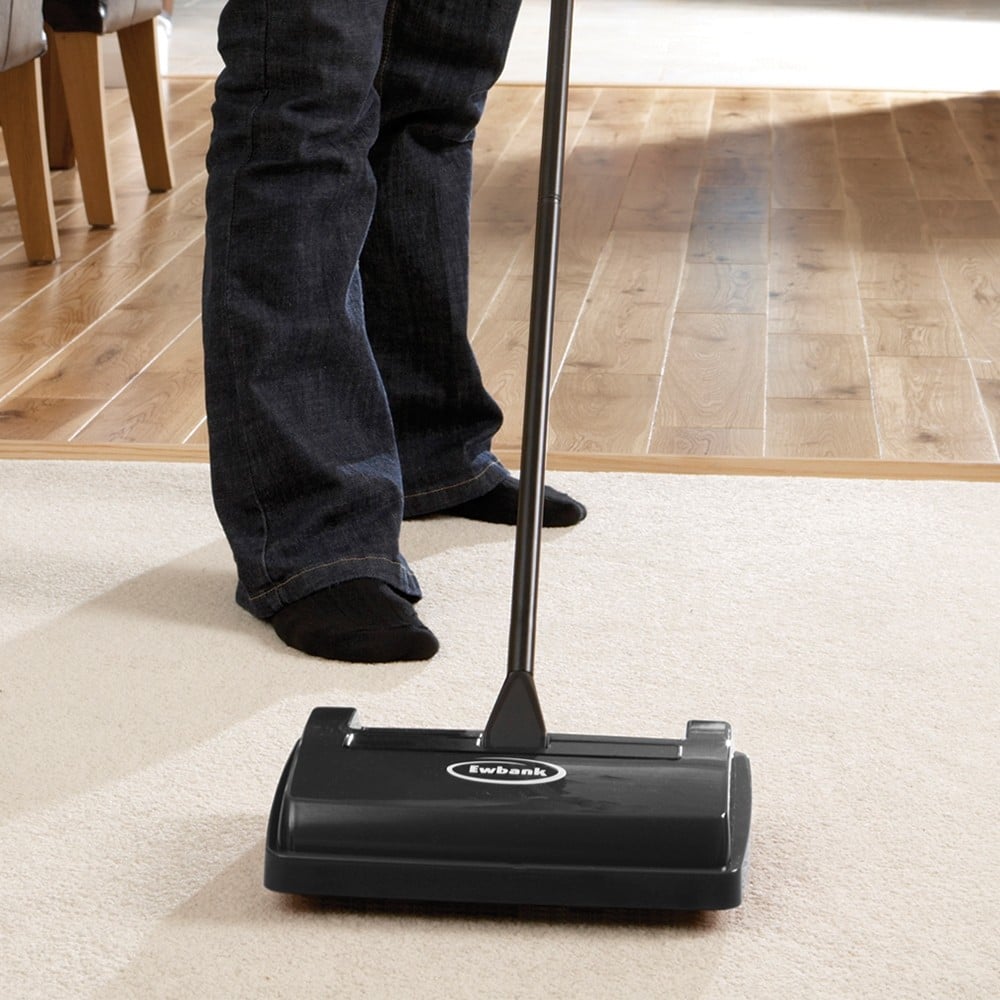 The manual sweeper was introduced in the 19th century and quickly became a staple in the domestic household. Often regarded as the direct ascendant of the electric vacuum, the sweeper laid the foundations for a new age of domestic cleaning and over 130 years later, they continue to be a household favourite. Now the manual sweeper sits alongside its own descendent as part of the latest Ewbank range, but how do they compare? And what are the pros and cons for both?

What is a manual sweeper?

A manual sweeper is a mechanical device which is used to clean floors, just like an electric vacuum. It consists of a body that houses a set of rollers and gears which, when pushed forward, rotate and sweep dirt into an integrated container. It does not require electricity or any additional assembly once put together. In comparison an electric vacuum does require electricity, through a power cord or using a battery pack. It may require additional assembly but is typically available in a wider variety of shape, size and style.

Why buy a manual sweeper?

The main and most significant positive for the manual sweeper is the price. Because they do not need electricity they are therefore inevitably cheaper; due to both the internal components not consisting of wires or motherboards, and also due to of the lack of running costs.

Manual sweepers such as the Ewbank EVO3 are also quiet, light and easy to store.

Electric vacuums (vacuum cleaners) when purchased cost on average £50 more than a manual sweeper*, plus the running cost of electricity. To start vacuuming they typically need to be plugged in and a button must be pressed which, although does not sound like much, is more than what is required for a sweeper. In addition to this they are frequently marketed as ‘quiet models’ but, when compare to a manual sweeper, the decibel rating is significantly higher. Furthermore, unless the vacuum is handheld, they too are likely to be much heavier.

That being said, this is counteracted by the superior cleaning performance and dust container size that most electric vacuums exhibit, including the Ewbank Motion.

A vacuum has the additional benefit of suction power which quickly and efficiently helps get rid of dirt. This dirt is deposited in a larger dust container meaning longer cleaning time and so increased coverage across the home. The final positive is that almost all vacuums have a secondary means of cleaning, be it attaching a tool or converting it to a handheld. This increases versatility beyond that of just the floor.

Any cookies that may not be particularly necessary for the website to function and is used specifically to collect user personal data via analytics, ads, other embedded contents are termed as non-necessary cookies. It is mandatory to procure user consent prior to running these cookies on your website.